MINNEAPOLIS, May 24, 2017 —  Two months ago, Richard (Rick) Mont of Grand Forks, ND was embarking on his 50th year in the sugar beet business when he started experiencing symptoms of what appeared to be a stroke.

“Originally, I thought I was having a stroke because I saw orbs, and was having trouble moving my two fingers,” says Mont. “It was the weirdest thing.”

Mont’s wife brought him to the hospital, where doctors ordered a CT scan.

Mont was diagnosed with a Brain Aneurysm.

“The doctors at Grand Forks Altru Emergency Room and Hospital were great at explaining the next steps of care,” says Mont.

He learned about stent-assisted coil embolization, a minimally invasive treatment where soft platinum coils are deposited into the aneurysm sac via a microcatheter to block blood flow into it.

“I chose to go to Abbott, (Northwestern Hospital) because I wanted someone experienced to do this, and they offered me the best.”

“We spoke for about two hours, and the team (radiologist, nurse, and coordinator) really set the stage for you, which builds a great environment for the patient to come into,” says Mont.

Mont and his wife packed their bags and headed to Minneapolis, MN.

Mont asked Delgado if he could get an appointment as early as possible because he had upcoming seminars in June for work.

Mont is retired from the McGinnis Institute of Beet Sugar Technology but has currently been consulting for the American Crystal Sugar Company for the past 15 years.

“I am a very busy guy, but Dr. Delgado, made everything happen for me.”

Mont received treatment on May 18th at Abbott Northwestern Hospital and was sent home the following day.

Today, Mont has a new perspective on life.

“You just never know what will happen, and I couldn’t believe it, but they got me in and out fast. I can walk and talk, and I am feeling great!”

1 in 50 people in the United States are currently living with an unruptured Brain Aneurysm according to the Brain Aneurysm Foundation. Learn more about the risk factors at bafound.org. 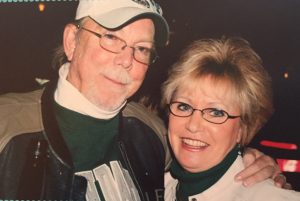 Featured: Mont with his wife, Marilyn